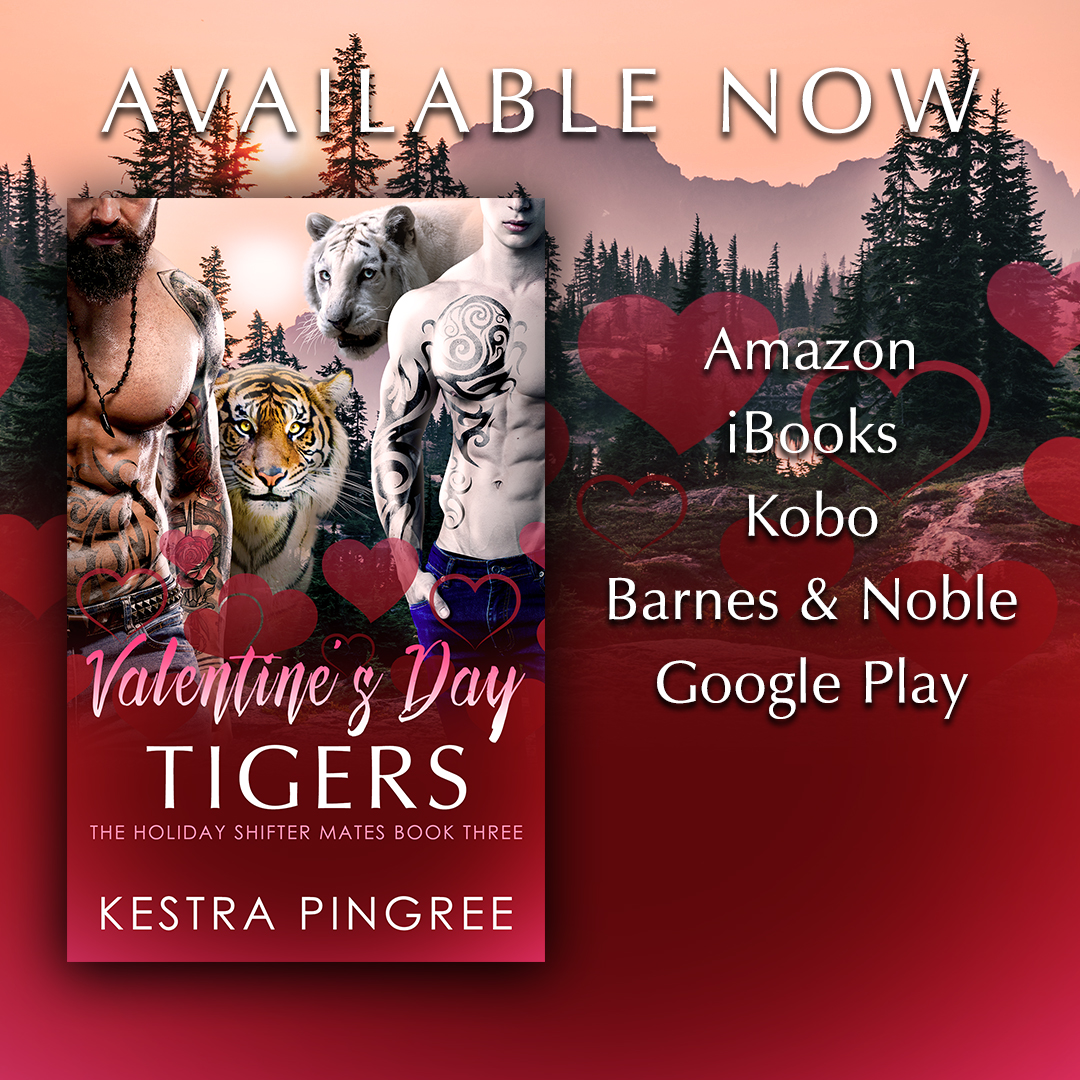 It’s me again. So many releases this week. Hot damn.

Take a little journey with my aro tiger, ace tiger, and non-binary human. You can read a website-exclusive sneak peek of the book below too.

***This book is meant for mature audiences.

“I don’t get what you’re doing here exactly,” Austin said, pushing his glasses up the bridge of his nose. His pale face flushed. “Mateo and I were supposed to be in bed hours ago. And why are you groveling on the floor now?”

“I’d understand if your house still looked like a bomb went off, but you’ve cleaned it out. It actually looks like a house.”

Lance didn’t say anything to that. There was no point in keeping any of that medical shit now that Yuri was better. He also didn’t know why Austin was talking to him. Last he checked, Austin didn’t like him or Yuri.

Mateo knelt in front of Lance and pushed Lance’s shoulders so their eyes met. “You’re making my mate anxious,” Mateo said and cocked his head. “Are you on something?”

Mateo went quiet. He searched Lance’s eyes as if he were waiting for him to expand on that thought. Lance didn’t. He said this instead: “You’ve changed. Since you came back from Utah with Austin, it’s like you’ve become a different wolf. You never go out with me and Yuri anymore.”

“You’re not out with Yuri either. You didn’t want to ‘get laid’?”

Lance closed his eyes to keep himself from screaming. Yuri hadn’t done much with sex since they were teens because his seizures acted up and then the PWD hit.

“I just wonder. What’s so great about sex?” Lance said. He meant to keep the thought to himself. He always had, but he let it slip.

His heart pounded in his chest when he realized what he had done. And he didn’t say any more. That one question brought an eerie silence. Neither Austin nor Mateo said anything, and the seconds dragged on. Lance was reluctant to open his eyes until he got this under control. He had to keep a cool exterior. His secret had to be kept a secret. So, he forced his eyes open and said, “Calm down, guys. I was just kidding.”

Mateo scowled. And he answered the question anyway. Sort of. “Because it feels good?” he said.

He stared at Lance for another moment, like he was still waiting for Lance to say something. Lance hated how he did that. Mateo took things differently than anyone else did. He saw things others didn’t. That was probably why he had gotten along with Yuri and Lance when he first came to Eurio. They were like outsiders together, but Mateo was acting like Eurio was his home. He always had in a way that Yuri and Lance hadn’t, but it was different now. He had no desire to cause trouble anymore. He wasn’t angry and had no reason to get that adrenaline rush. His wolf was forever dicey, but Austin had him now. Mateo would go for a run if he needed to, but he did it alone, without getting anyone else ripped up in the process, and he was always eager to get back to his mate.

“You don’t think so?” Mateo asked.

Lance rolled his eyes. “I mean, why is sex with your mate so great that you turned into another shifter?”

Austin shoved his glasses up the bridge of his nose again even though they hadn’t fallen. He was dressed in plaid flannel pajamas and looked like a proper nerd. He frowned and folded his arms when Lance spent more than a second looking at him as if he were embarrassed Lance was seeing him like this.

“For the record, I don’t have a problem with Austin. It was just confusing at first.” Lance meant to say that to Austin himself, but he couldn’t look the human in the eye. “You know, Mateo? It used to be you, me, and Yuri. You were ready to go anywhere with us, and we were ready to add Austin to the mix, but that went to hell in three seconds.”

“I don’t dislike you,” Austin defended. “But yeah, I don’t really get all the stuff you like to do. Gale doesn’t even know the extent of it, does he? You guys put yourselves in a lot of danger sometimes, you know? Mateo is bad enough, but Yuri especially… He takes things as far as they’ll go, and I… I worry. I don’t know what I’d do if Mateo got hurt.” Lance knew that Austin worried about more than Mateo getting “hurt.” He did that. Everything was the worst-case scenario with him.

“Yeah,” Mateo scratched the back of his head, “I don’t enjoy worrying my mate, and I don’t feel like I need to do that stuff so much anymore.”

“So, having a mate turns a shifter soft,” Lance concluded.

“No. I do feel different, though. I used to be empty, but I don’t feel empty anymore. Before, adrenaline was the only thing I could feel. Now Austin keeps me going, and it’s not just about sex being good. It’s everything about Austin.”

Austin’s face went cherry red, and he fixed his glasses with a nervous fury; he simultaneously knocked them over as he tried to push them up the bridge of his nose. Over and over. Lance had to look away from him. It was just too damn pitiful.

But he didn’t get it either.

He didn’t get Yuri’s dangerous streaks that went beyond… well, beyond. But he would go along with almost anything because Yuri was his brother. At the very least, he had to be there for Yuri to keep him safe. Yuri was his world ever since their dad died. Even before that, Yuri had always been his world.