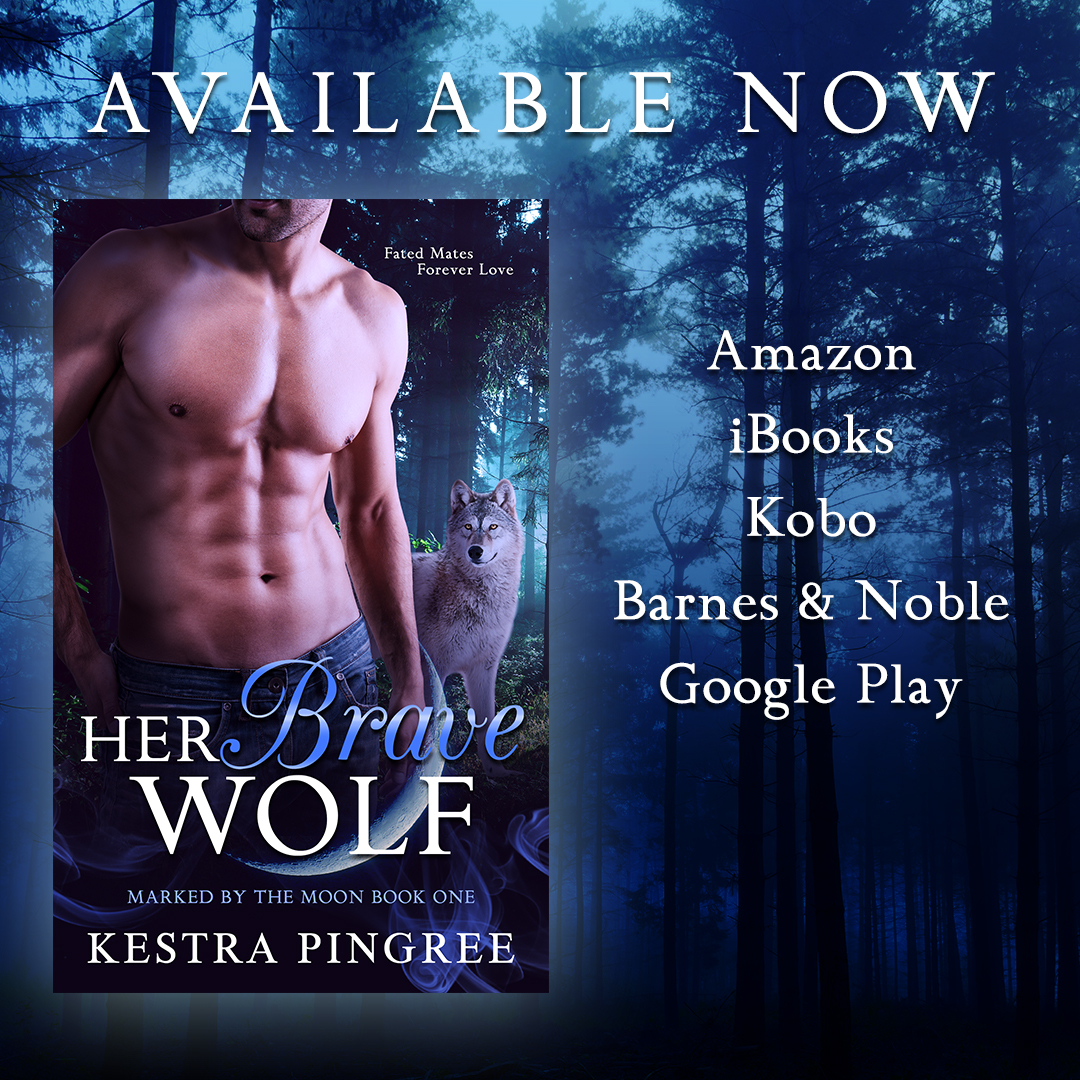 If you’re in the mood for some steamy shifter romances, I’ve got you covered.

Also, check out a website-exclusive excerpt below. 😉

The man cleared his throat and averted his gaze. He rested his eyes on some invisible point near her right shoulder.

“You need to release me from our contract,” he said in a gruff voice.

He held up his left hand, the back of his hand toward her face. She saw the sheen of the odd moon-like shape she had on her right hand. Involuntarily, she lifted her right hand to meet his left. The closer she got to touching him, the more the symbol on the back of her hand seemed to buzz. The pearly off-colored skin was changing too. It was no longer reflecting light, it was producing a light of its own. His was doing the same. He suddenly jerked away from her before she touched him.

“Just say you don’t hold me to fulfilling my end of the bargain,” the man said hastily. Gwen thought she could see him shaking. “Say the terms of our contract have been satisfied.”

Scowling, Gwen said, “I never expected anything from you in the first place.”

“Come inside,” Gwen said, softening her tone. “We can talk more.”

She opened the door wide enough to allow him entry. He didn’t say a word as he brushed by her and into the cabin. She felt the slightest touch of his ridiculously muscled arm as he did. Her heart pounded in her chest, but she tried to ignore it as she shut the door behind them.

The man walked a few feet inside, but that was it. There was a wood-framed sofa he could have sat on, but he opted to stand in the middle of the room instead.

“You can sit down, you know?” Gwen informed.

He grunted in response.

Shrugging, she asked, “Do you want ibuprofen or something?” She cocked her head. “Or maybe you should actually go see a doctor. You seem to get hurt a lot.”

The way his entire body seemed to stiffen made Gwen hold her breath in anticipation for whatever response he would give, but then the tension left his body.

“No doctor. The ibuprofen I’ll accept,” he said.

Relief washed over Gwen. Maybe he didn’t feel as cold toward her as he was acting after all. He didn’t seem to think she was going to poison him or anything at least. What did he actually think of her? Last time she saw him, his dick did some talking of its own. He must have found her attractive. Was he scared of her? Surely he knew she was on his side at least. Whatever that meant. She couldn’t put her finger on it, but she wanted to help him, just like when she found him bleeding as a wolf in the forest. She would have felt that way for anyone, but there was something about him that was almost familiar. It wasn’t familiar so much as she felt like she could be vulnerable around him—something she would never feel comfortable with around anyone else. She felt no need for pretenses.

“Ibuprofen it is then,” Gwen agreed as she waltzed to the bathroom. She didn’t know what about this man put her at ease and in such a good mood, but damn did he do it. Her legs felt weak around him, and her core lit up with fire. Looking at him could paralyze her. She wondered if it had something to do with magic, like how he could turn into a wolf. Maybe he was using magic to make her feel this way. That sounded dangerous, so why couldn’t she bring herself to care?

Once she grabbed a couple pills from the cabinet, she returned to the main room of the cabin and held them out to the man whose name she really needed to ask. She hoped he’d at least brush her hand with his, but he simply held his hand out, palm up. Disappointed, she dropped the pills in his palm without touching him. She was about to offer him some water, but he swallowed the pills dry.

She clasped her hands behind her back to discourage them from moving on their own. Why did she want to reach out and touch him so badly? She wanted to be reminded of just how firm his muscles were, and she wanted to feel his warmth. She thought sex with him would probably be amazing, unlike the last time she had sex. She shook her head. What was she thinking? It was something she couldn’t explain. And it was all crazy. He could shapeshift into a wolf!

“You get in fights a lot?” Gwen asked. She needed to chill out before she came across as a total creep or something. She never liked guys coming on strong to her in the past—though she would have felt very differently about this one. Maybe he was a guy who wouldn’t have appreciated a woman doing the same to him. How could she know?

He frowned at her and stayed silent.

So maybe she shouldn’t have asked that. “Look,” she said, trying to save herself, “you don’t have to be scared of me or anything. I’m not going to tell anyone you can turn into a wolf. I doubt anyone would believe me if I did anyway, so you have nothing to worry about.”

He growled. Actually growled at her. His lips curled into an aggressive snarl, showing off teeth that looked sharper than any human teeth she’d ever seen. They looked much more like a dog’s. A wolf’s. Especially the canines. The aggressive gesture definitely should have scared her, but it didn’t.

“I’m not scared.” He spat and folded his arms.

Gwen grinned. Unlike his growl, her grin put him off balance. He raised an eyebrow at her. God, was he hot. She wanted to put her hands on either side of his face and pull him down for a kiss to see if those lips were as kissable as they looked. Gwen was tall herself, but her wolfman was taller and much broader. Gwen had always prided herself on being fit and muscular in her own right, but she was still a woman. She wondered if him being this large had something to do with him being a wolf. She hadn’t seen many guys his size.

“Show me your wolf then,” Gwen taunted as she folded her arms to match him.

He scoffed. “I want you to break this contract. Do that and I’ll show you a wolf.”

“Okay,” she said nonchalantly. She had no idea what “contract” he was talking about. He showed her the moon on the back of his left hand like it had something to do with this contract he kept going on about. Hell if she knew how to get rid of it, but he seemed to know what he was talking about, so it couldn’t be that hard.

“So say it,” he reminded, exasperated. “Say that you don’t hold me to fulfilling my end of the contract and that you release me.”

“Yeah, okay,” she replied. “I don’t hold you to fulfilling your end of the contract, and I release you. Happy?”

He held out his hand and looked at the moon mark intently. He stayed like that for a few long seconds before he let his hand fall to his side. He closed the gap between him and Gwen in an instant and grabbed her right hand. She couldn’t hide the little shuddering gasp that escaped her lips. His skin was warm all right, and just him holding her hand was killing her. Her body temperature seemed to turn up fifty degrees. Her underwear was going to be soaked at this rate. Her wolfman’s eyes seemed to dilate in response to her own reaction, and it made her burn hotter. She was fairly certain her cheeks were literally on fire in this moment. Her lips were trembling, and her eyelashes were fluttering. She was so caught up in this stupor, she didn’t notice when the man’s attention was on her hand and he was no longer looking into her eyes.

When he brought her hand up to her face, she felt slightly coherent again. He was showing her the back of her hand where the moon mark was apparent. It wasn’t glowing or anything weird like what she was sure she saw before. It was the same pearly skin she was growing accustomed to.

“You have to mean it,” he said, but his words came out ragged like he had just been running a marathon. Gwen couldn’t read minds and she wasn’t an empath or anything, but it looked to her like she had the same effect on him that he had on her: a nearly crippling attraction.

“I do mean it,” she replied, her voice shaking with anticipation.