Halloween Werewolf will be available on a bunch more retailers tomorrow! To celebrate, I made some images with quotes from the book. They’re totally shareable. Download them and reupload them on any social media site, pin them, save them for yourself–just have fun! Let’s do Halloween right with some wolf-shifter lovin’. 😉 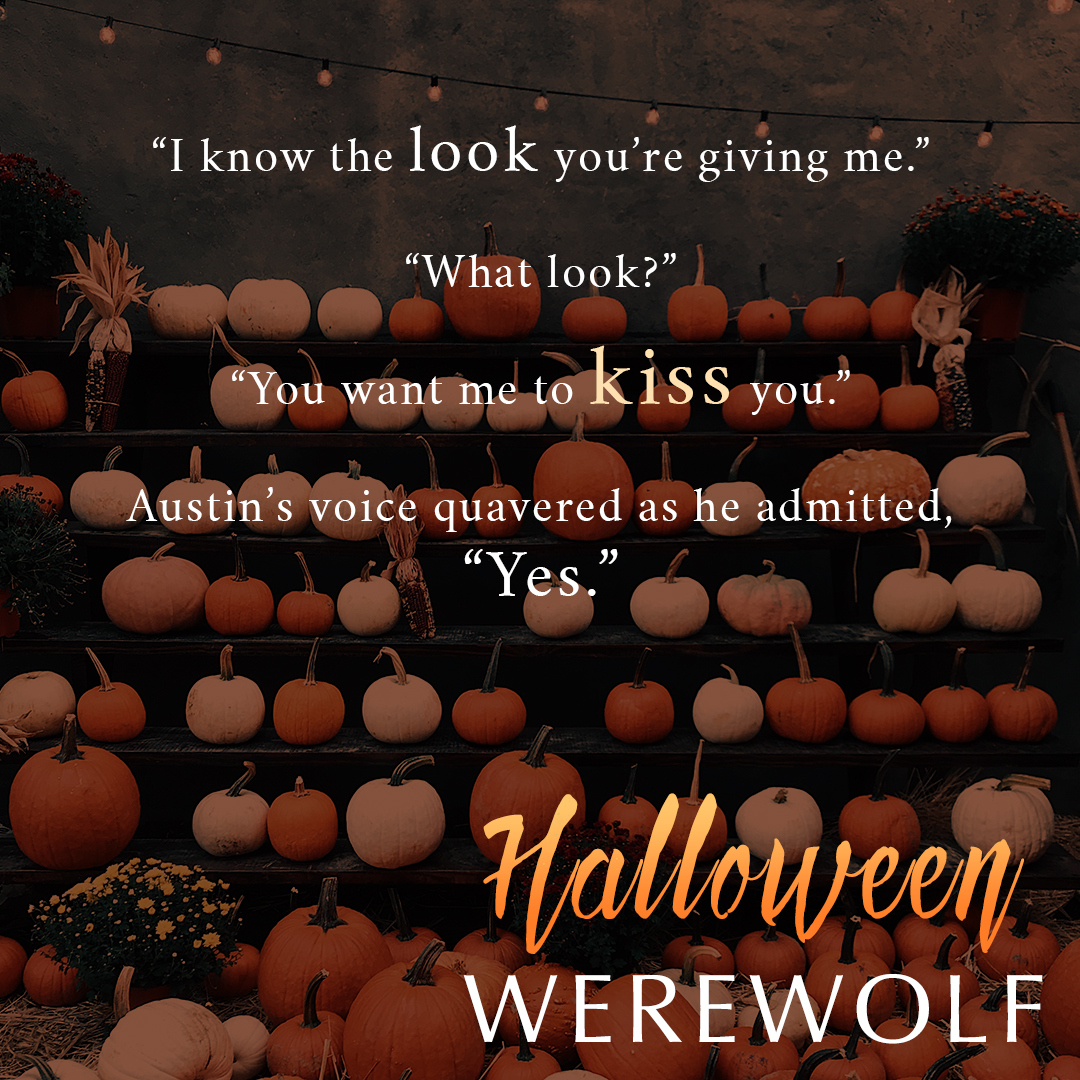 “I know the look you’re giving me.” 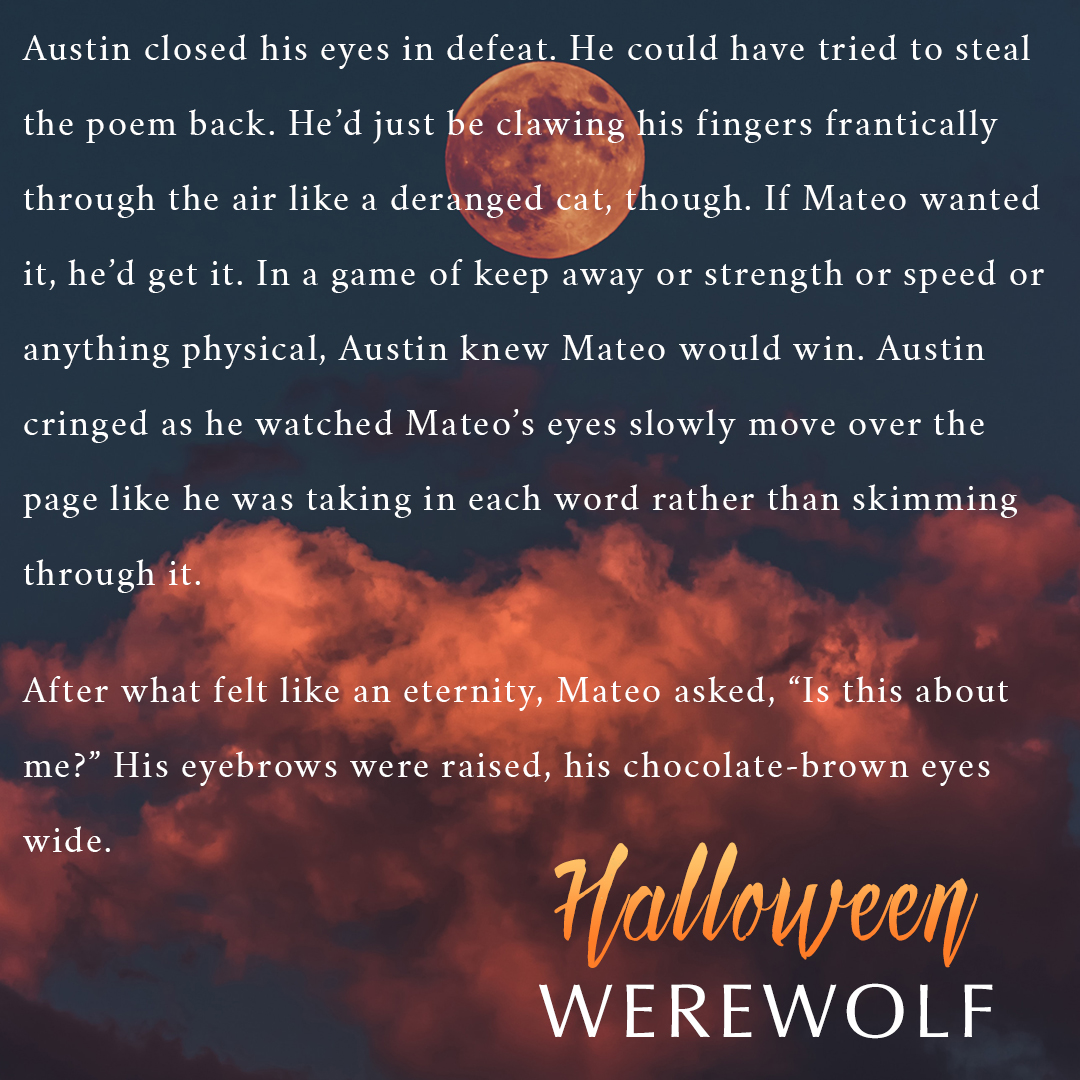 Austin closed his eyes in defeat. He could have tried to steal the poem back. He’d just be clawing his fingers frantically through the air like a deranged cat, though. If Mateo wanted it, he’d get it. In a game of keep away or strength or speed or anything physical, Austin knew Mateo would win. Austin cringed as he watched Mateo’s eyes slowly move over the page like he was taking in each word rather than skimming through it.

After what felt like an eternity, Mateo asked, “Is this about me?” His eyebrows were raised, his chocolate-brown eyes wide. 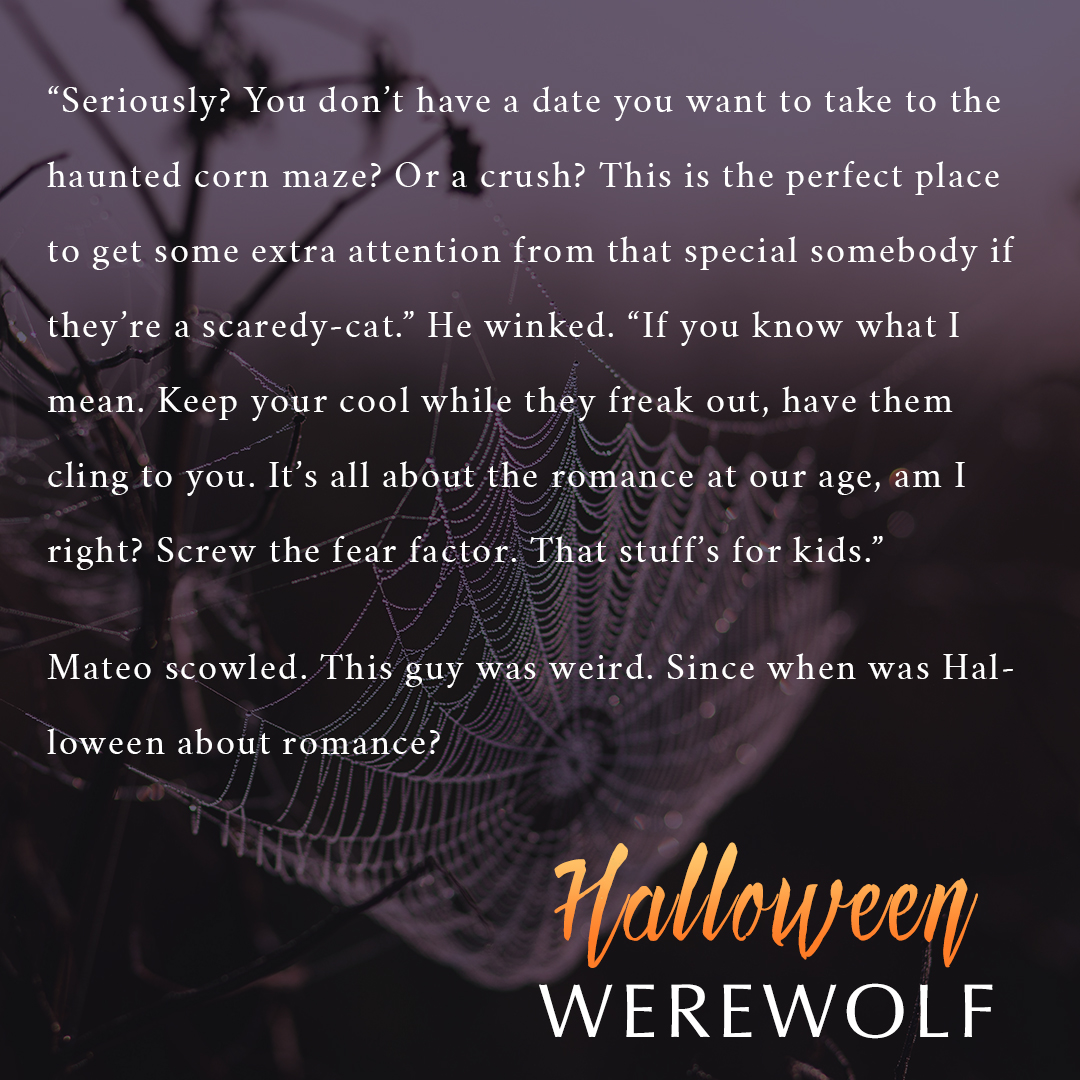 “Seriously? You don’t have a date you want to take to the haunted corn maze? Or a crush? This is the perfect place to get some extra attention from that special somebody if they’re a scaredy-cat.” He winked. “If you know what I mean. Keep your cool while they freak out, have them cling to you. It’s all about the romance at our age, am I right? Screw the fear factor. That stuff’s for kids.”

Mateo scowled. This guy was weird. Since when was Halloween about romance? 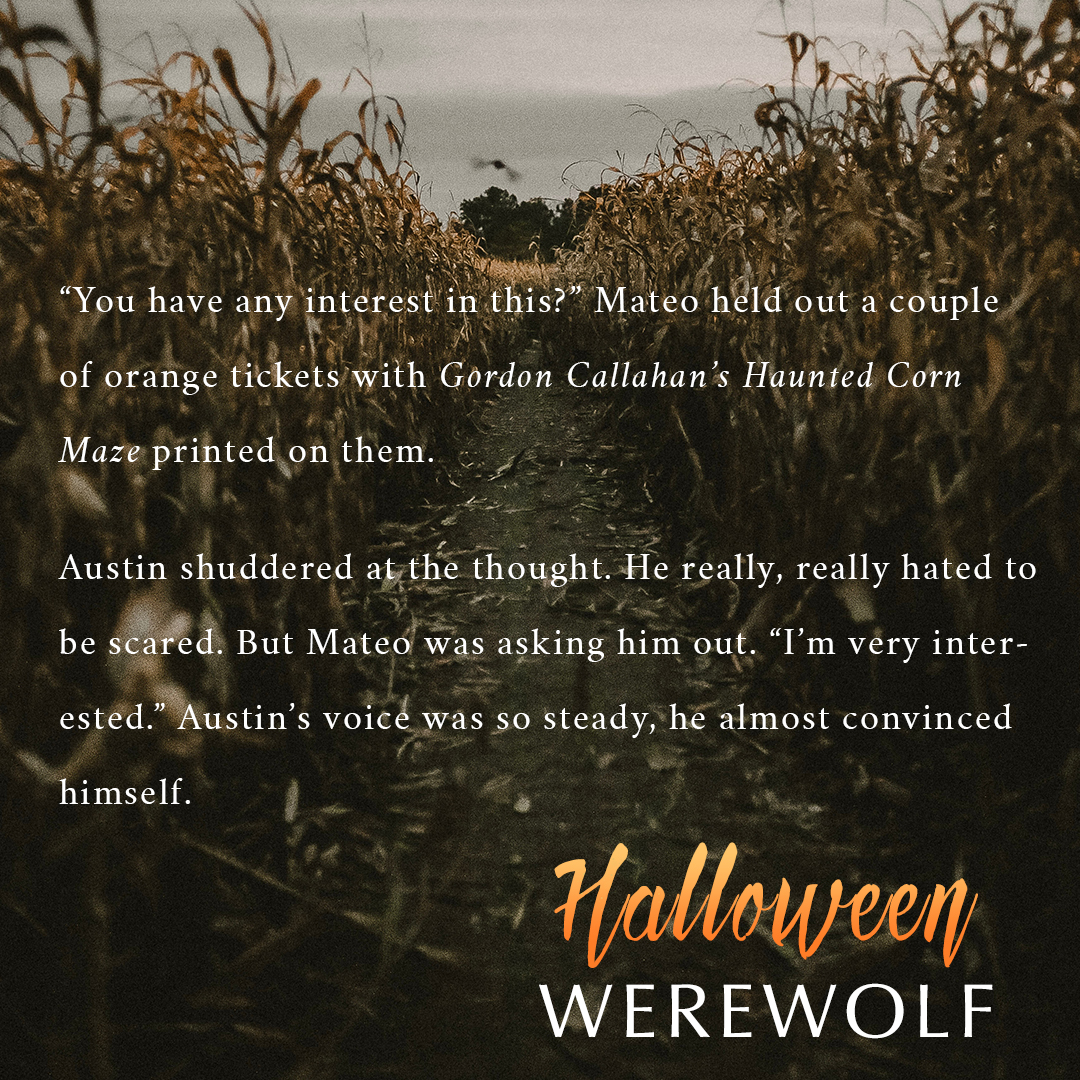 “You have any interest in this?” Mateo held out a couple of orange tickets with Gordon Callahan’s Haunted Corn Maze printed on them.

Austin shuddered at the thought. He really, really hated to be scared. But Mateo was asking him out. “I’m very interested.” Austin’s voice was so steady, he almost convinced himself. 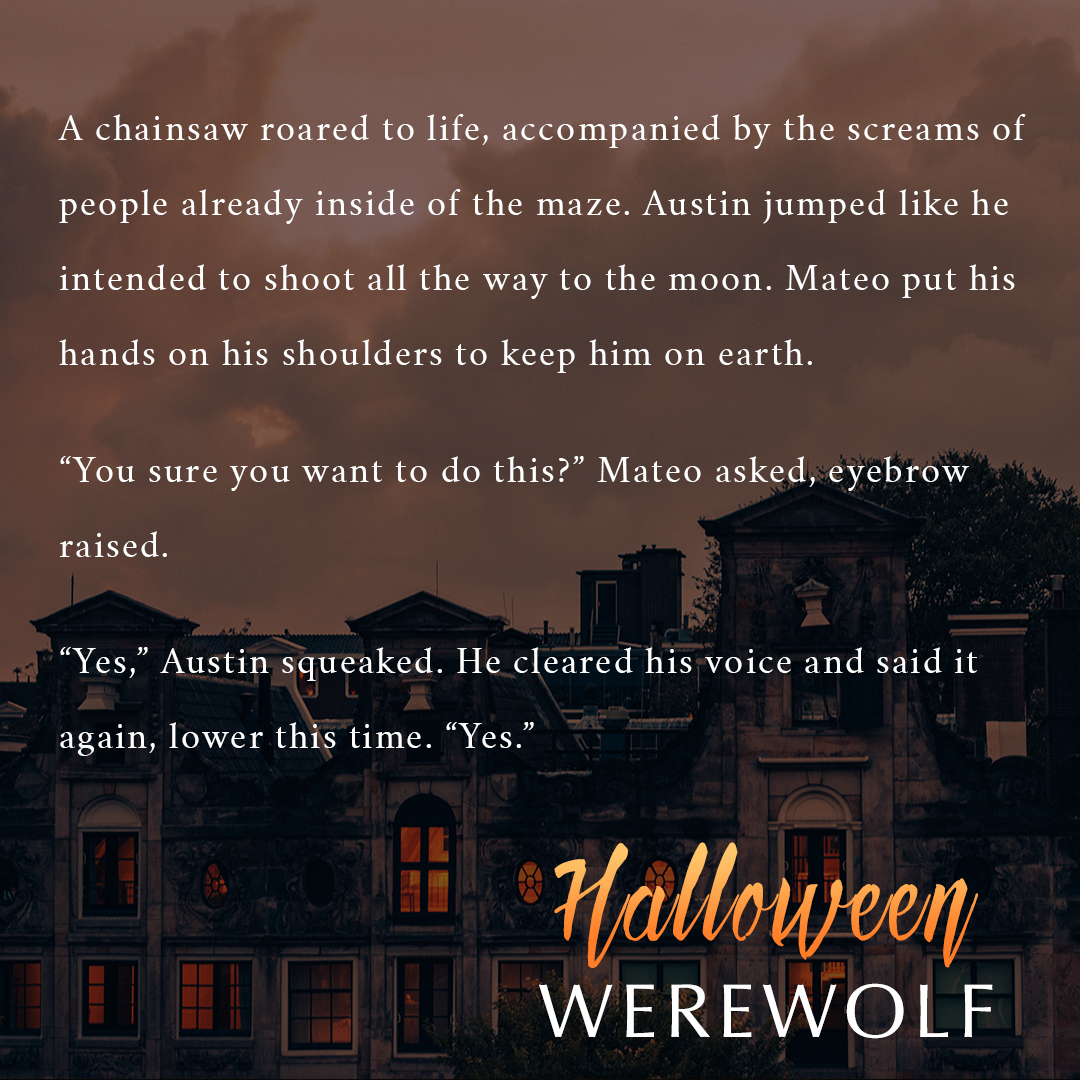 A chainsaw roared to life, accompanied by the screams of people already inside of the maze. Austin jumped like he intended to shoot all the way to the moon. Mateo put his hands on his shoulders to keep him on earth.

“You sure you want to do this?” Mateo asked, eyebrow raised.

“Yes,” Austin squeaked. He cleared his voice and said it again, lower this time. “Yes.” 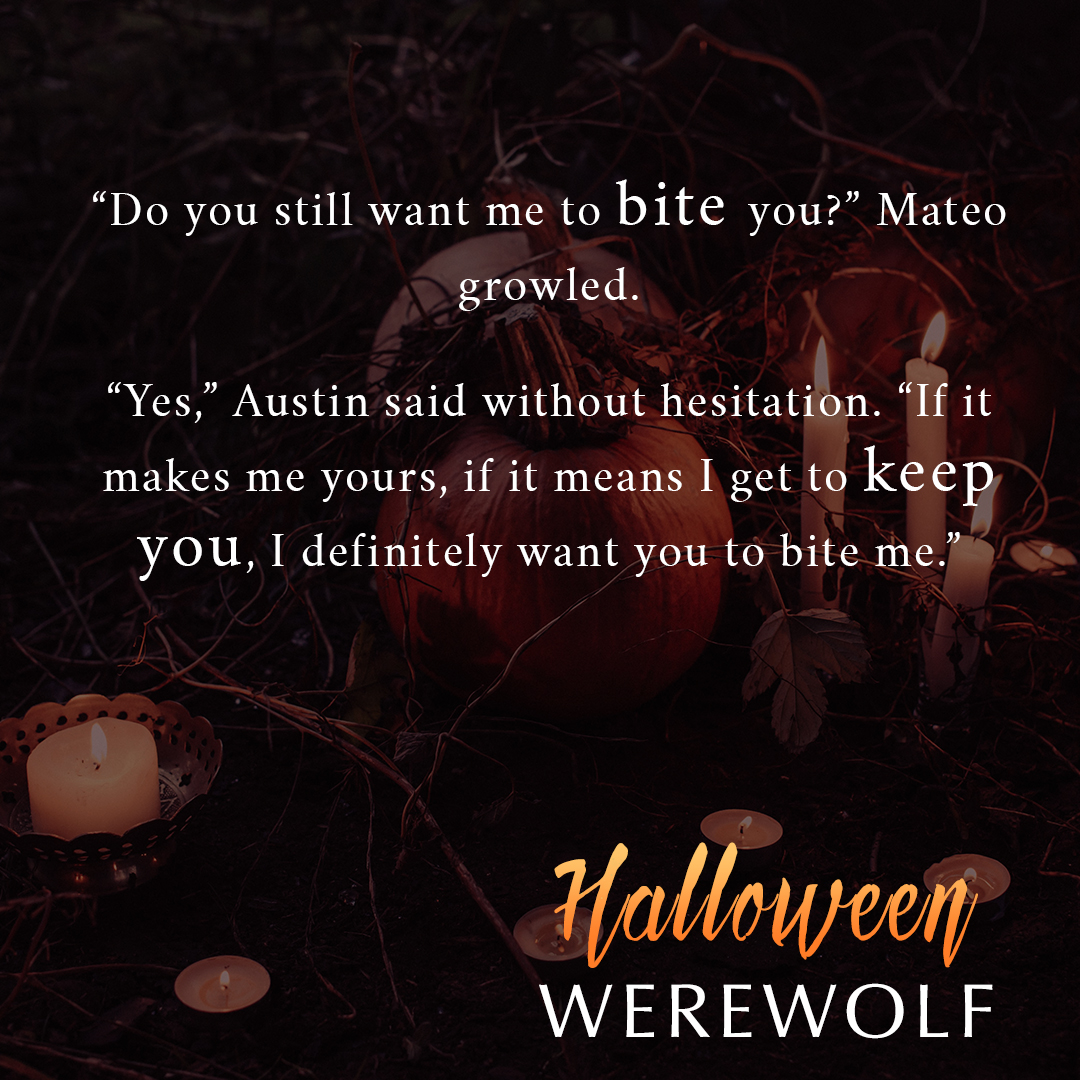 “Do you still want me to bite you?” Mateo growled.

“Yes,” Austin said without hesitation. “If it makes me yours, if it means I get to keep you, I definitely want you to bite me.”